Review of the Path Aided to the Hunter that goes up the eastern wall of Sass Maor in the Pale di San Martino. Itinerary with high gap and rather long but not technically difficult.

The starting point of the itinerary for the Hunter's Trail at Cima Stanga is located in Val Canali in the town of Prati Fosne. To reach Val Canali we will have to take the Strada Statale 347 of Passo Duran which connects the eastern slope of the Dolomites of the Pale di San Martino with the western slope. Coming from Fiera di Primero (Trento) follow for about 5 Km towards Agordo up to a wide hairpin bend with clear indications for Val Canali. We follow the road going up the Val Canali, we walk all the way up to follow a wide hairpin bend to the left and we continue on the now narrow and sometimes dirt road until we reach the Hotel Casera. Near the hotel we will see an intersection of roads and keep the right uphill to the parking lot. Directions for Google Maps available here.

From the Fosne locality we follow the little road and soon we leave it following north-east the 719 trail that rises with a moderate slope initially in the wood. After a short time we leave the forest and gradually proceed northwards going up the Val Pradidali now on a slight slope to a junction in the Pedemonte locality (1h 30 'from the parking lot): go straight up the Val Pradidali reaching the hut of the same name, we will keep the left with signpost 742 that, up steep climb on gravel, leads us under the eastern walls of Sass Maor until thestart of the Hunter's Aided path near a landslide that fell from Sass Maor some years ago (2h from the parking lot).

Let's begin by going up with the equipment the area that was subjected to a landslide which leads us to the original start of the aided path. let's begin bypassing an edge and subsequently going up to the left on the ledge sometimes exposed. There cengia continues uphill under the overhanging walls of Sass Maor. We continue pleasantly alternating uphill protected ledges in short sections of very climbing rocks and having no difficulty meeting some metal brackets in the most vertical passages. These new brackets added in the last maintenance of the aided path have considerably reduced the challenging stretches of this historic aided path.

Let's continue on one long ledge on grassy ground in constant exposure until you reach one spur that we bypass and we enter the valley that separates the Cimerlo from Sass Maor. We cross a stretch on an unstable ground until we reach what was the key point of the route. It was supposed to go up a challenging dihedral. Now go up with one long series of metal bracketa that reduce, if not reset, the original difficulties of the passage

Once out of the passage we are now in a little valley mixed with stones and grass where we will follow the red and white signs present. In front of us the saddle (2410 m - 2h 30 'from the start) to be reached with hard but not difficult climb where it ends the aided itinerary of the Sentiero del Cacciatore.

From the climb we have two options:

The report continues with this second option.

Reached the hut we follow the indications for the Aided path Depaoli with trail marker 734 that will take us back to the parking lot along the western walls of the Stanga first and then of Cimerlo. The path initially faces some not difficult aided sections: we will have to go up a aided groove, run across ledges, an easy one chimney down to the end of the aided parts. The trail then continues cutting along the hillside with beautiful views leading us to gradually lose altitude up to bring us back to Fosne (3h from the Rifugio Velo della Madonna - 8h 30 'total).

The itinerary presented is long and with a considerable difference in height. The technical difficulties are reduced and mainly prudence is needed in the various sections not aided along the route. The only challenging passage present in the original route has now been aided with many brackets and therefore greatly facilitated. The main difficulties could be encountered due to the ascent and descent to Cimerlo.

As indicated in the report a typical combination is the Ferrata Buzzati in ascents and the Hunter's Aided path downhill as well as the Depaoli Aided path is an option (longer though). From Val Canali you can proceed towards Malga Canali and reach the Treviso Hut where two beautiful and challenging aided trips depart: the Via Ferrata Fiamme Gialle Ferrata to the Reali Shelter and the Via Ferrata del Canalone. Proceeding towards the Veneto side of the Pale di San Martino we meet the Via Ferrata Orsa and the challenging via ferrata Ferrata Stella Alpina at Agner. 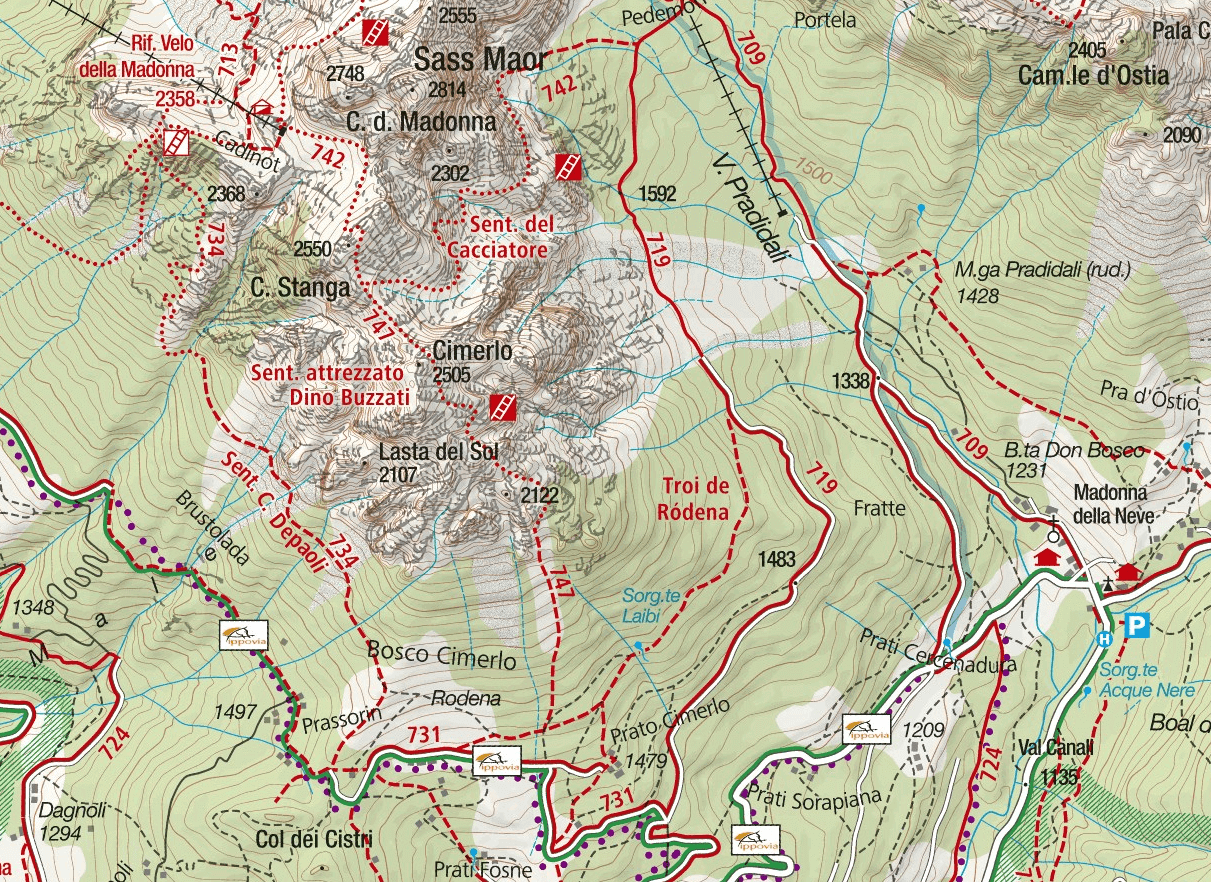 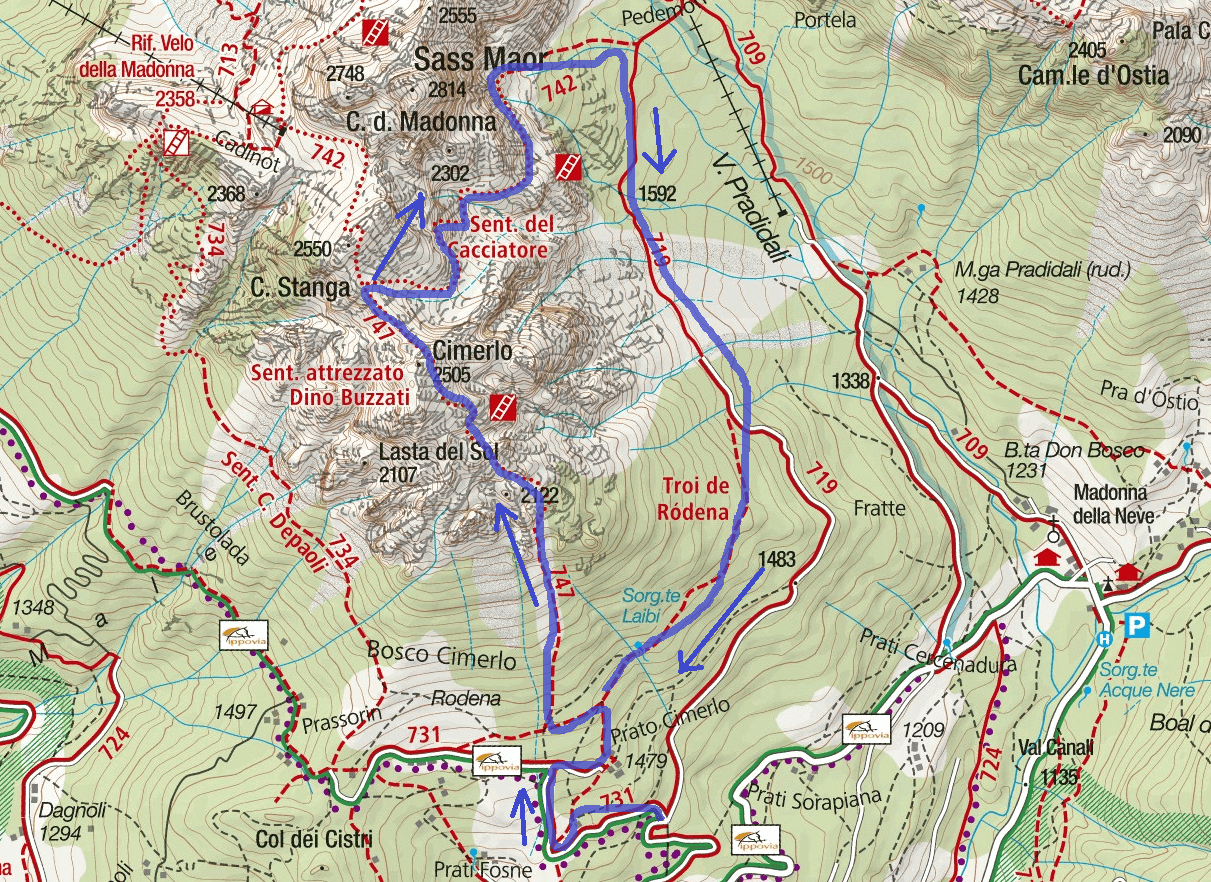 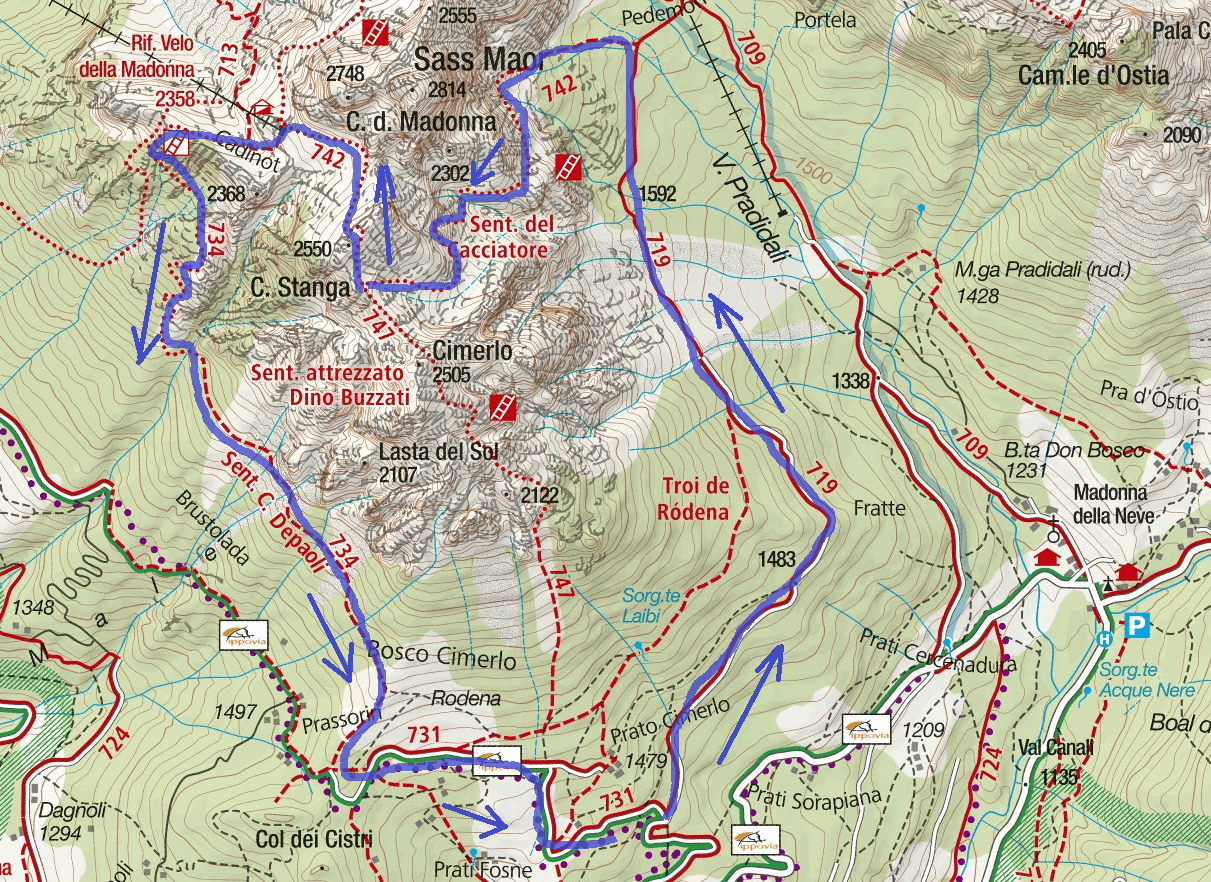 Images Hunter's Aided path. The images included in the report were sent to us by the users of the site. If you are interested in sending us photos, use the form on the left or send them to our Facebook page.