Aided path of the Scalette

The Aided path of the Ladders is the most direct option that leads from the Gardeccia Hut to the austere valleys of the Larsec and Laussa. The itinerary does not present particular technical difficulties and can also be followed by newcomers to the aided routes. Attention must be paid to the weather if you decide to continue the hike in the two valleys at high altitude.

The starting point of the itinerary is the Gardeccia Hut in the Val del Vajolet, valley parallel to the Val di Fassa - province of Trento - but forbidden to private traffic.

Once at the Gardeccia Hut (1949 m) we will have to follow the path CAI 583 which, keeping to the hillside, passes under the cliffs of the Larsec and continues in an easterly direction until it gets around the impressive rocky ramparts and continues northwards in a more marked ascent. We come to a stretch where a sign indicates that we should continue keeping the left on a new track that replaces an old track that was subjected to a landslide (1h from Rifugio Gardeccia).

From this section onwards the actual aided path of the Scalette is crossed, which climbs up into a gully at the end of which we will reach Passo delle Scalette. The first aided section of the route begins they are present on an exposed ledge beyond which a series of metal brackets allows us to go up a traverse. Let's continue now in a stretch of steep path without equipment until you reach a second stretch aided. This stretch is composed of rocks that rise up remaining on left side of the canyon. We reach a short vertical jump in which some new metal bracketa give support in progression. Let's go up a new stretch of steep path and we reach without particular difficulties the Passo delle Scalette (2348 m - 1h from the start - 2h from Rifugio Gardeccia).

Once you reach the Passo delle Scalette you have to consider which option to choose for the return. We present 3 among the various alternatives present:

The Aided path of the Ladders does not present any particular technical difficulties in its development except for the difference in level to be covered which requires a good physical condition. A worthy note of merit concerns the continuation of the itinerary in the detrital valleys of the Larsec or Laussa. These valleys are devoid of support points and in case of continuation under a thunderstorm they could be more prohibitive than in normal conditions so plan the trip with an eye to the weather.

The Aided path of the Ladders can be combined with the Ferrata to the Catinaccio d'Antermoia - as indicated in the report - or to the Via Ferrata Bepo de Medil, preferably downhill. If you travel more days in the Catinaccio it could be combined with via ferratas in the northern area of the Group (Ferrata Laurenzi and Ferrata Maximilian) or turning west you could combine this route with the easier via ferratas to Passo Santner, the Via Ferrata Masarè or the Ferrata to the Roda di Vael. 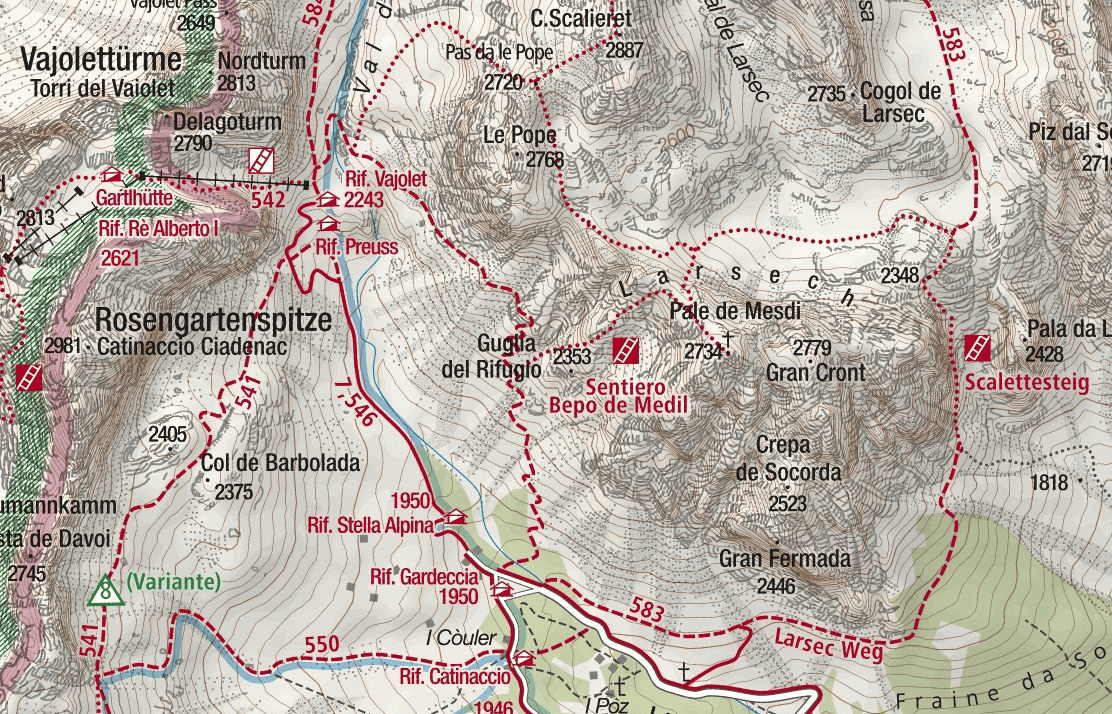 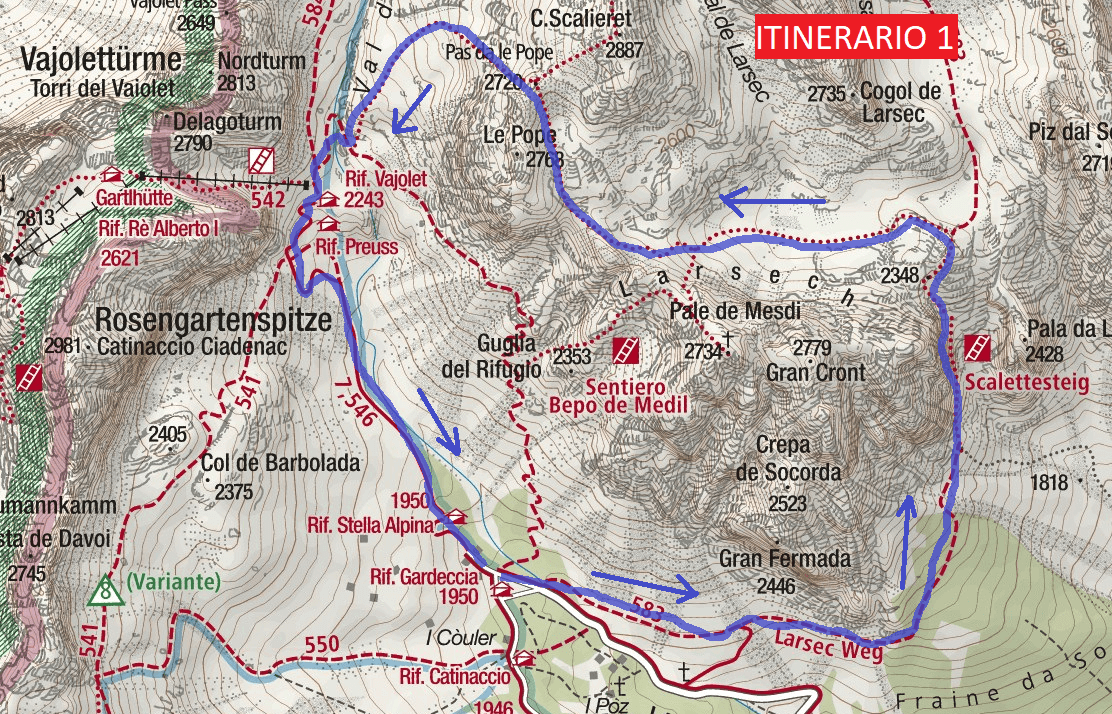 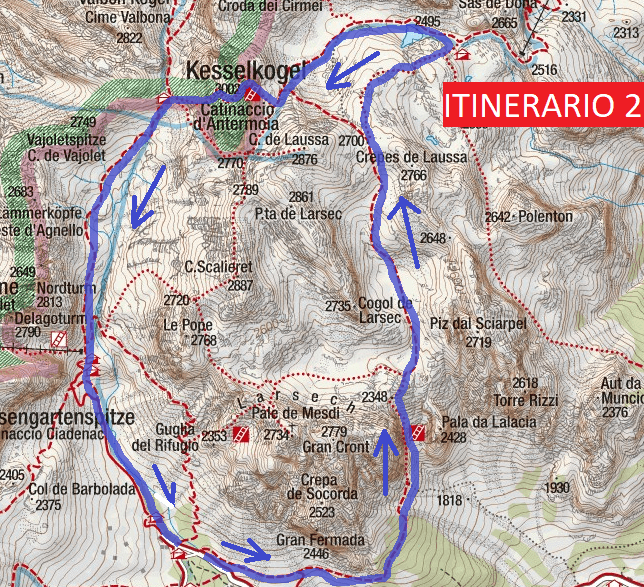 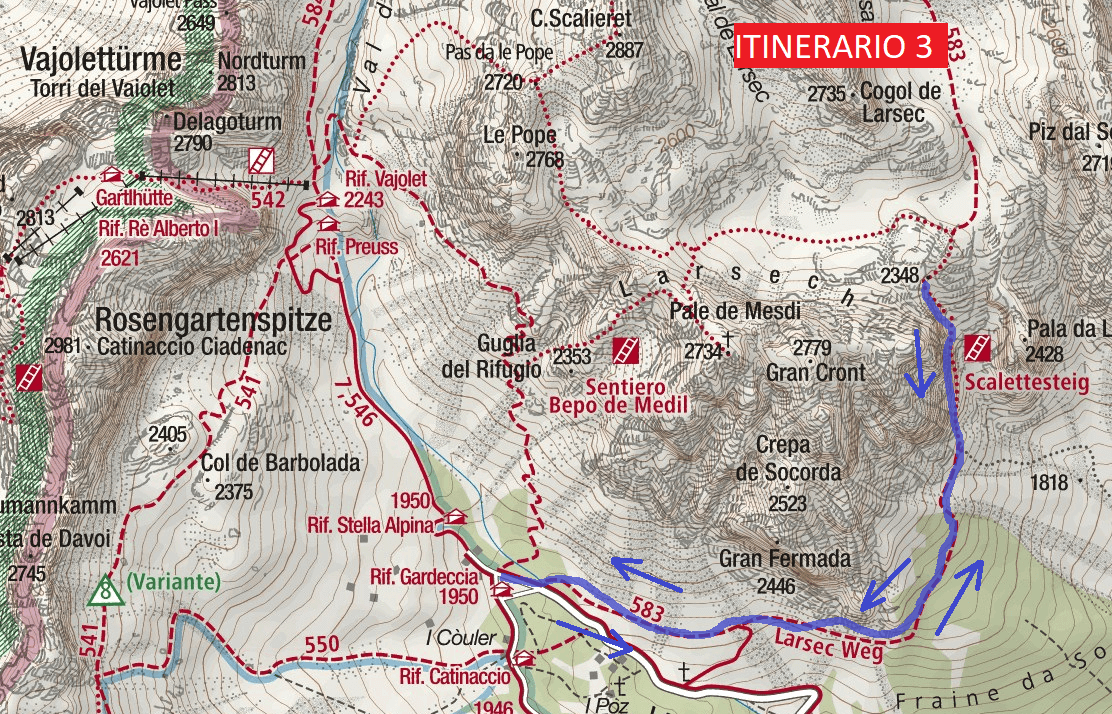 Images Aided path of Ladders. The images included in the report were sent to us by the users of the site. If you are interested in sending us photos, use the form on the left or send them to our Facebook page. 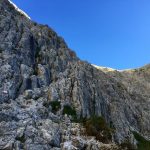 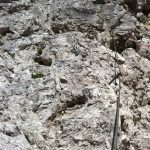 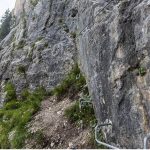 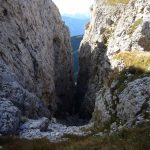 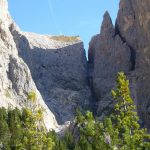 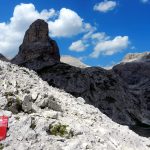 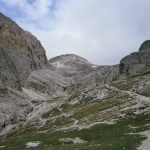 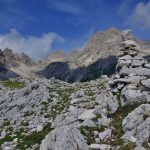 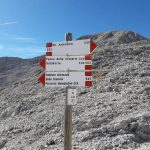 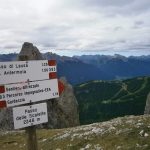 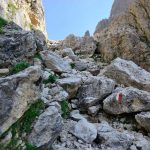 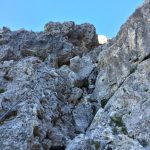 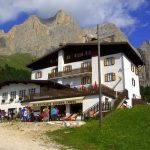