Aided path of the Mar

Review of the little beaten Aided path of the Mar in the northern slope of the Pale di San Martino starting from the village of Gares in the province of Belluno. Technically not difficult route, with beautiful views of the Focobon.

The starting point we suggest for the itinerary is the village of Gares on the Veneto side of the Pale di San Martino. To reach the inhabited block of Gares, you generally reach the Agordo valley, pass the town of Taibon and reach Cencenighe where we will keep to the left (west) towards Falcade. Once in the village of Canale d'Agordo follow the signs to Gares to the left (south). The road continues in a beautiful valley for about 7 km to the village where there is a convenient parking area. From the parking lot we walk to the visible church and take the itinerary.
Directions for Google Maps available here.

From the village of Gares we follow the signs to Malga Stia, first stop of our approach. Initially we hike on one offroad track until you reach a cross in the road: you can keep the offroad track on the right or continue straight on path 754 up to the left side of the Val di Greta. We advise you to hike the steepest path so to avoid a long series of switchbacks. We then hike path 754 until we reach Malga Stia (1785 m - about 50 'from the parking lot).

From Malga Stia we will have to undertake the path 752 that rises between green lawns in the direction of Forcella Stia. The path is beautiful and pleasant and after about 30 minutes we admire the Ridge of the Mar where we will undertake the aided part of the itinerary. We proceed without difficulties substantial to reach Forcella of the Stia (2190 m - ca 1h from Malga Stia - approx. 1h 45 'from the parking lot) with a magnificent view of the nearby Campanili del Focobon. Forcella Stia is a wide grassy saddle where to the left the Aided Path of the Mar comes off with clear indications and we recommend to wear the equipment already at this point, although the first aided sections will be mainly horizontal.

We set off on the path in front of us Ridge of the Mar up to a metal ladder and a sign indicating the beginning of the equipped sections. Once up the ladder, we go along a first equipped stretch consisting of a slender ledge. After this first part of the path we continue on a grassy ridge following the faint trail in the direction of the evident rocky crest that we will face remaining just below the wire. We follow the development of the metal cables remaining under the edge paying attention to the grassy and earthy ground which in some places could be slippery after recent rains. We go up some steeper sections, always equipped, until we reach a panoramic point (2300 m).

From this point we walk a grassy ridge exposed but not difficult downhill. The trail is pleasant and without difficulty. A couple of aided passages go around the edges and we continue until we reach Punta dei Mar (2365 m - ca 1 h from Forcella Stia - 2h 45 'total).

The route resumes very beautiful in the presence of Focobon with its imposing rock face. We reach the base of the Campanile del Lastei and we begin an aided descent that will surely be the most technical part of the itinerary. We begin by descending now on stretches of supported walls and some equipped slabs on the western side of the Campanile with a couple of vertical passages and more challenging, but not difficult. We steeply lose altitude reaching a narrow path with not always stable bottom that leads to the Col de Pedoci (2237 m - 1h 45 'from Forcella Stia - 3h 30' total) where in fact the Aided Path of the Mars ends under Monte Mulaz.

The disadvantage of this return is in fact to cover the outward journey in large part. An interesting but more challenging alternative is the following. The return to Gares is through the Passo delle Farangole and the Cengia della Fede (itinerary not to be underestimated with equipped sections and other sections not exposed and exposed). This itinerary takes about 4h 30 'from Rifugio Volpi for a total of about 8h 30'. This variant includes some exposed stretches near the Farangole Pass as well as the crossing of some exposed snowfields even in late summer. The Bank of Faith is very suggestive but scarcely marked (although development is often intuitive). Stable weather conditions are needed.

An important note is about the track of the Sentiero dei Mar. The route is not very repeated and therefore in some sections of the itinerary, although the development is rather logical and intuitive, the track is barely visible and therefore could be more problematic finding your way in case of poor visibility and fog. From a technical point of view, most of the aided passages are easy but the ground requires attention since it is dirty, sometimes invaded by vegetation, etc.

In a two-day itinerary it is also possible to go for the easy and short Ferrata del Canalino al Mulaz, which however develops on the opposite side with respect to the Volpi Refuge and requires planning. 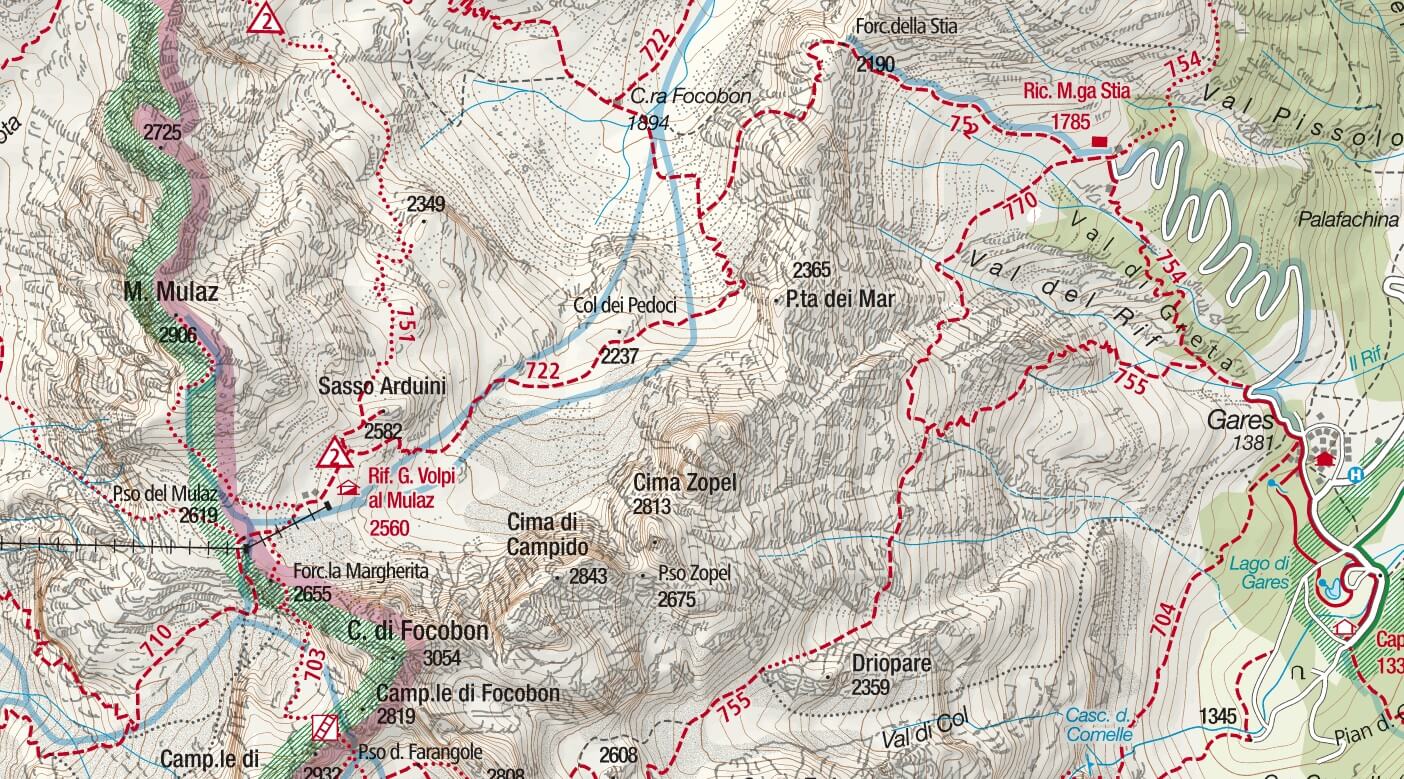 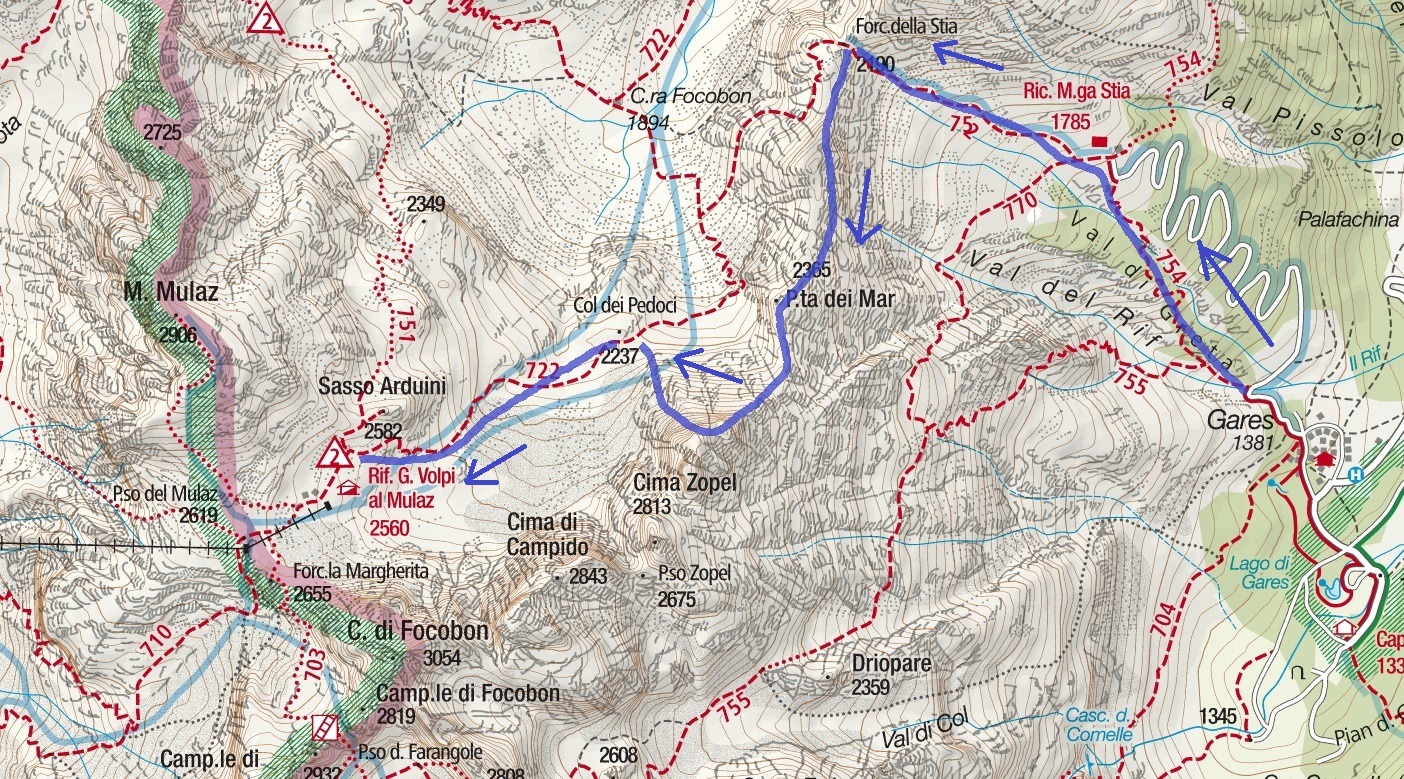 Images Equipped Path of the Sea. The images included in the report were sent to us by the users of the site. If you are interested in sending us photos, use the form on the left or send them to our Facebook page. 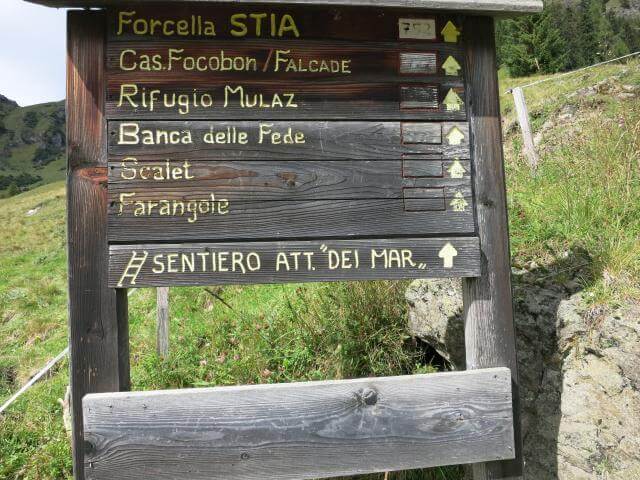 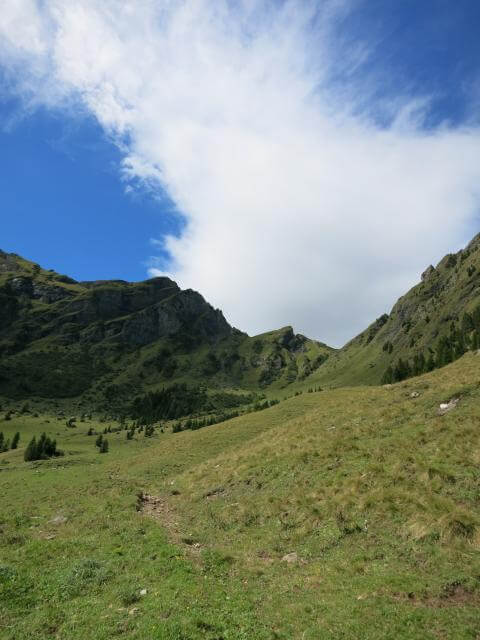 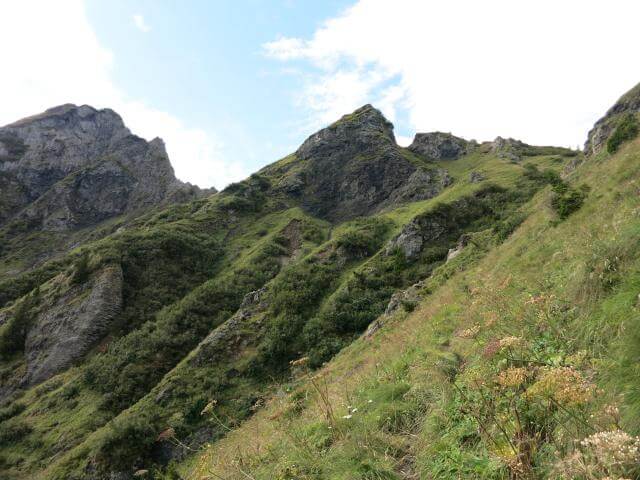 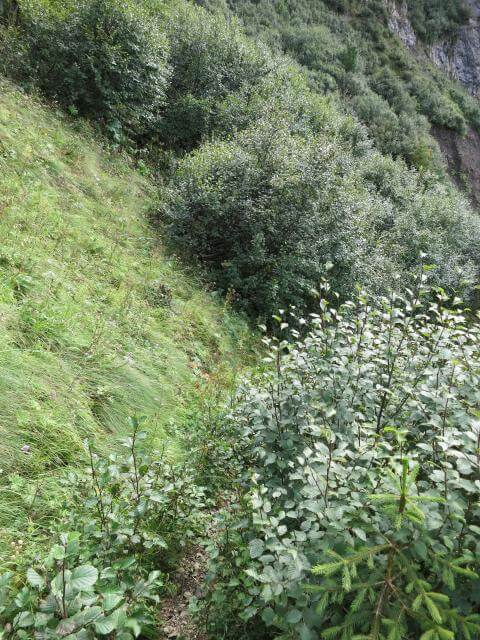 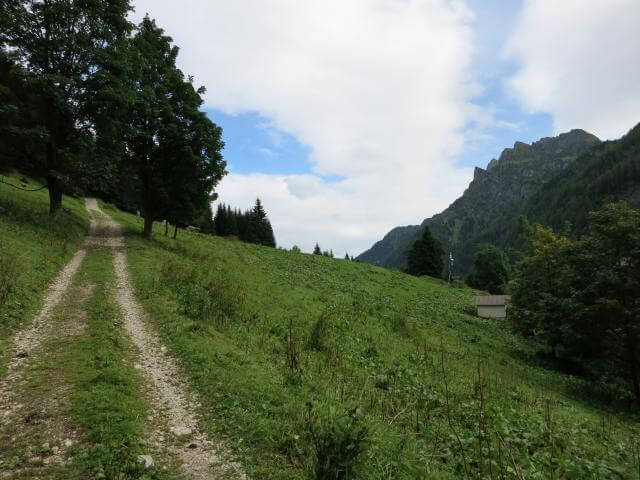 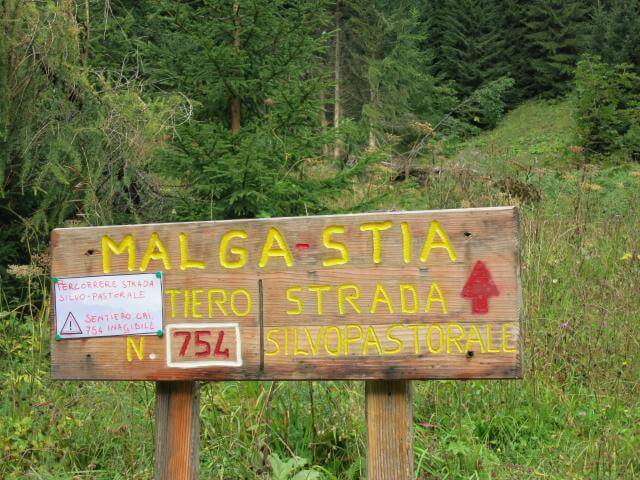 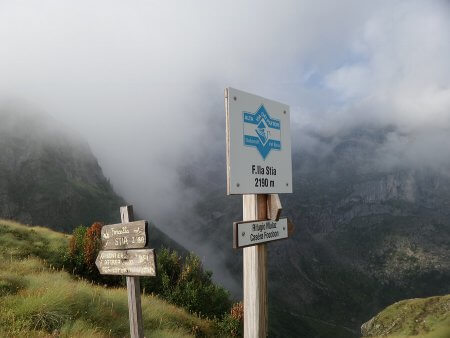 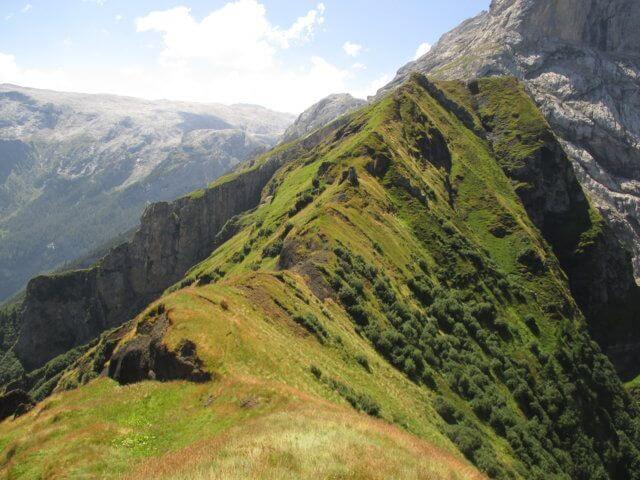 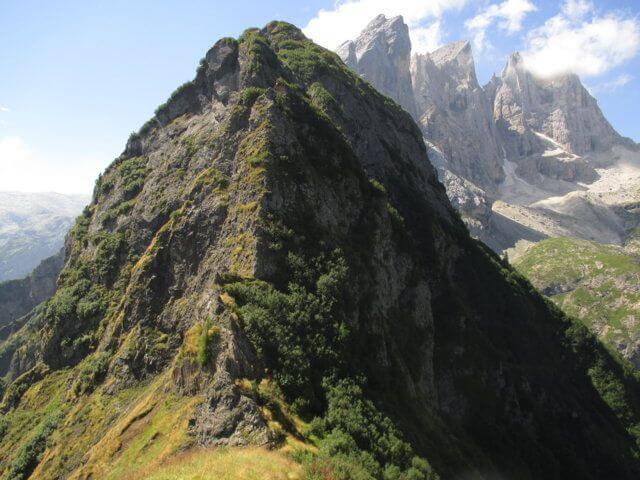 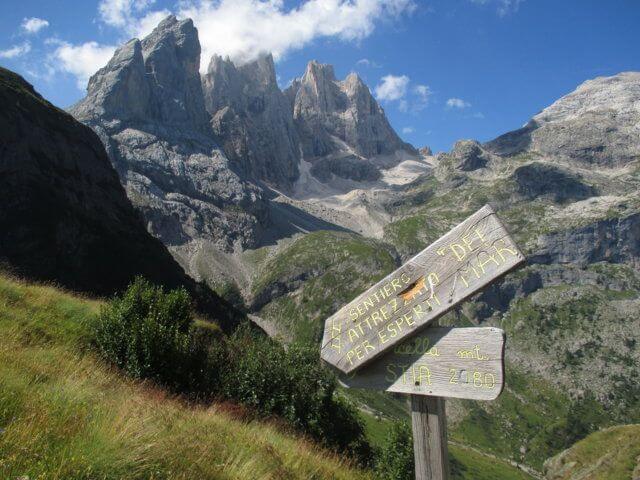 Webcam Equipped Trail of the Mars in Falcade (Col Margarita).