The Aided path Olivieri is a pleasant itinerary that starts from the Rifugio Pomedes below Punta Anna and reaches the Rifugio Ra Vales under the Tofana di Mezzo in the Ampezzo Dolomites. The itinerary is easy with a couple of more challenging and exposed steps. This path is often traveled downhill for the return from the demanding via ferrata to Punta Anna or to the Tofana di Mezzo.

The starting point of the itinerary is the Baita Pie Tofana (1675 m) where the chairlift goes up to the Rifugio Duca d'Aosta. From Cortina take the road towards Passo Falzarego. Shortly after exiting the village on the right there are signs for the Tofana cable car. From that point we follow the uphill road turning right at the first intersection until we reach the Baita Pie Tofana. Directions for Google Maps available here.

From the parking lot of the hut (1675 m) we are next to the ski lifts with chair lift ascending to the Pomedes Hut or the actual departure of the Olivieri Aided path. To reach it we will have two options:

A third option is possible - however inconvenient for the return with this itinerary - starting from the Rifugio Dibona. In this case you could use the chairlift to go back to the Pomedes Hut at the end of the itinerary and then return to the Dibona.

From Rifugio Pomedes we have to take a half-hill stretch on the scree which descends from the eastern wall of Punta Anna. We climb a few meters meeting the cart road that to the left detaches itself in descent towards the Rifugio Duca d'Aosta. We take it until we cross the track that comes off to the left. We follow it on the scree that leads us to the rocky wall below Torre Pomedes. Under the wall we meet one commemorative metal slab both the Olivieri Aided path (30 'from the Pomedes Hut) and the above Ferrata Olivieri. We begin the aided path, starting with a couple of jumps on rocks and then starting to walk one aided uphill ledge appropriately when it becomes thin and exposed. After this long stretch of ledge uphill we face a most challenging first step. We will have descend in the direction of a groove (attention to snow even in late season) going down a well appetina wall. We cross the gully and let's start a new ledge on a detrital surface that rises to the right. There ledge narrows in a passage, we go around an edge and we leave the first aided section of the path and climb a normal path. Behind us we see in the distance the Rifugio Pomedes, the Nuvolau and the Averau on the opposite side of the valley.

Now the most interesting part of the aided path starts. Let's face one first wall supported that we go up bending to the left. We cover a stretch of ledge and reach the first exposed staircase with one beautiful panorama. We climb the ladder and we reach a new series of well climbing and exposed rocks with which we reach a ledge slightly downhill to the left that goes around a gorge and we begin to walk a steep and winding stretch of gravel path. We continue to the right going around the Torre de Pomedes on its eastern side. The trail leads us to a spur of rock that we go up with the second ladder. After the staircase we climb a new scree that leads us into a chimney. The chimney is rich in hand and footholds and the rope runs on the left side. A first leap can be a little athletic but above it are the holds. We leave the chimney and walk along one ledge under a rocky roof helping us to we go around an edge and we descend on the opposite side of the corner, concluding the aided section of the Sentiero Olivieri (2580 m - 1h 15 'from the start - 1h 45' total).

At this point we see a debris valley closed between Tofana di Mezzo to our left and Ra Valles to our right. The winter valley is a very popular ski slope. We will have to go down keeping the right of the valley following the tracks until we reach the Ra Vales hut (2470 m - 15 'from the end of the Aided path Olivieri - 2h from Rifugio Pomedes) intermediate station of the cable car ascending to the Tofana di Mezzo.

We will now have to return to the starting point. There are some options:

The Olivieri Aided path is often a downhill path as a return path from Via Ferrata Olivieri in Punta Anna or from the Via Ferrata Aglio to Tofana di Mezzo (using the first section of the cable car that descends from the Tofana). For this reason it will be frequent to meet hikers who travel the route in the opposite direction to the review. This can create problems mainly in the stairs and in a couple of vertical passages which nevertheless remain short.

The Olivieri Aided path is a path that can be easily combined with other aided routes, as indicated in the report. In addition to the options of the Ra Bujela and Ra Pegna approaching or the most challenging Ferrate Olivieri and Aglio with Tofana di Mezzo, could be combined with the neighbor Aided path Astaldi, possibly in an itinerary that starts from the Dibona Hut. 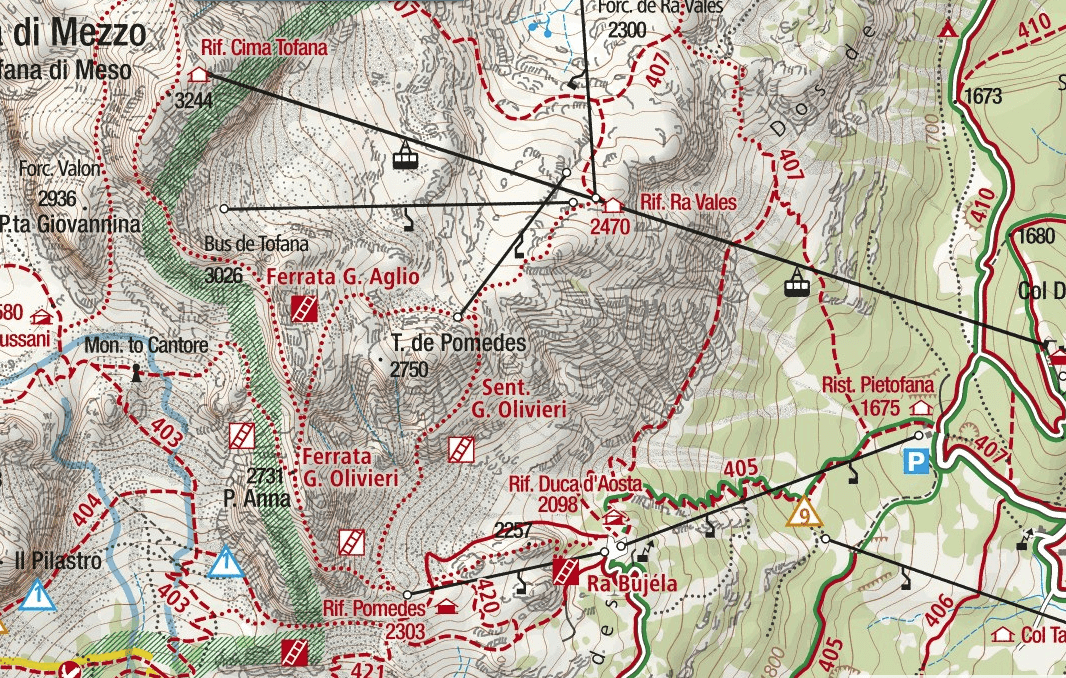 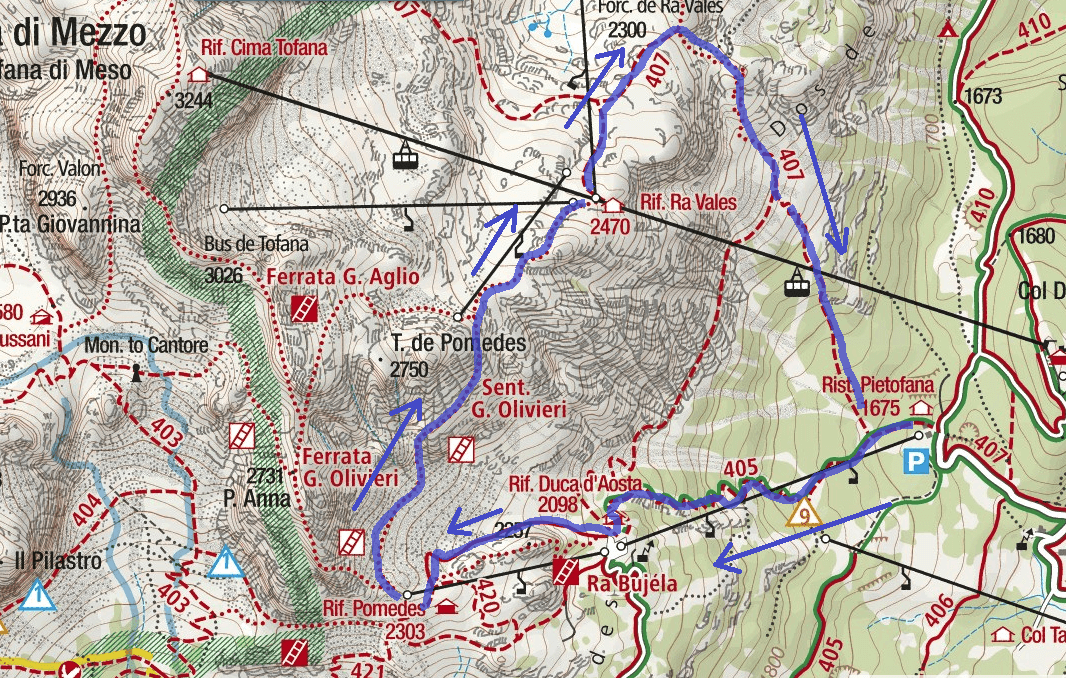 Images Olivieri Aided path. The images included in the report were sent to us by the users of the site. If you are interested in sending us photos, use the form on the left or send them to our Facebook page.